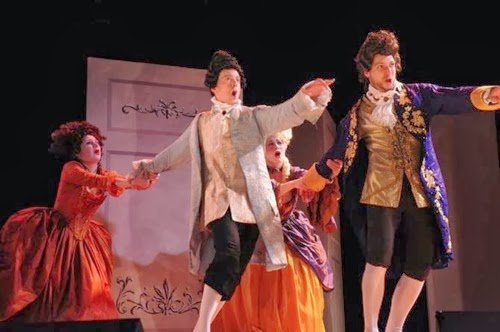 I'd always wanted to go to the opera. In the past and in other beloved cities I'd gone to the ballet, the theater, and classical music concerts, but never the opera. It's all so fancy and high-class that I have trouble even saying the word without it sounding, well, snooty. Ahhh-prahh. The very idea of it is so Paris: get dressed up, go somewhere fabulous, have a night on the town. So you can imagine how thrilled I was recently to snag tickets to the Paris opera for a mere ten euros.


You read that right. TEN measly little euros to attend one of the season's final performances of Cosi Fan Tutte, music by a little-known composer named MOZART. And this was not a rare occasion; there are cheap tickets to the Paris opera available for every performance.

All you have to do is go to the opera website and decide which show you want to see, and where and when it's playing. You can go to either the Palais Garnier (the famous opera house, the one with the Métro named after it), or the Opera Bastille (the smaller, less opulent theater) - I would recommend the former. Go to the ticket office or billetterie at least one hour (though to be safe I would recommend 1.5 to 2 hours) before the show starts. I got there an hour and a half before the show and there were already about 30 people ahead of me, and it was just a random Tuesday in November. Hop in line, and wait for a really long time, pretending to look at your phone or read a book but really judging the other people in line. Be grateful you're inside and not out in the rain.

Then, at one hour before the performance, they open the ticket booth. They do sell off some unused season ticket-holder places when available, but those can cost you upwards of 150€ a pop or more. That's not the cheapskate style. When you get to the ticket window, let the salesperson know you'd like one of the 10€ spots if they're still available. She'll look at you disinterestedly and inform you that the view is terrible. Believe her. This is the reason for the term "the cheap seats in the back": 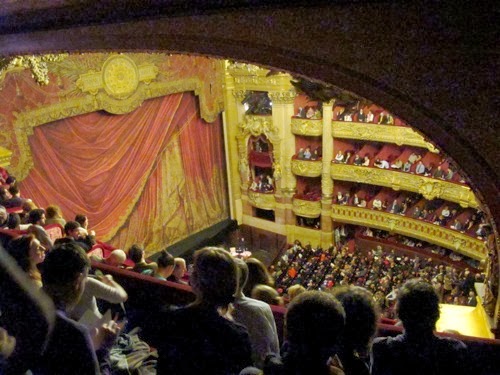 But it's worth it. Because going to the opera is about much more than seeing the stage - it's about enjoying the utterly breathtaking, downright majestic space, and listening to some of the best orchestra musicians and singers in the world. It's a glamourous and special cultural occasion. All of that, for ten euros? It's a steal.

And, for God's sake, when you go, get a little gussied up. There's no place for your shopping bags and hoodies at the Opera Garnier - not even in the cheap seats.